Posted in Media; Tagged Cathedral Cove, Must Do; Posted 5 years ago by Independent

New Zealand is a popular film location due to its dramatic landscapes and relatively small population. The Coromandel is no exception with Cathedral Cove, regarded as a must do activity for a visitor to New Zealand, featuring in The Chronicles Of Narnia: Prince Caspian.

Cathedral Cove is commonly known as the spot featured in Narnia. South of Hahei a cliff face overlooking the Pacific Ocean was used for the discovery of Cair Paravel, a site that is best observed from the water.

Cathedral Cove is a 45-minute walk from the coastal resort of Hahei on the Pacific Coast. Due to its increasing popularity, there has recently been an increase in access via a new network of walking trails. These trails will eventually link together opening up more of the dramatic scenery that Mercury Bay is famous for.

However, the best way to visit the Cove has to be with one of the many boat tours into Te Whanganui o Hei Marine reserve, some of which are rated among New Zealand’s best boat trips. Once there, visitors can marvel at the aquatic life and even go for a swim with the natural inhabitants. Boat tours leave from Whitianga or Ferry landing, booking early is recommended particularly in the peak season.

You can opt to access the cove from Hahei with a one hour tour that takes in other jaw-dropping locations such as ….a blow hole, once again book ahead. Alternatively, there is an on-demand water taxi from Hahei Beach to Cathedral Cove, no booking required.

Kayaking to the cove is an unforgettable experience, as with the guided boat trips you’ll receive running commentary on the cultural, historical and ecological significance of this popular attraction. 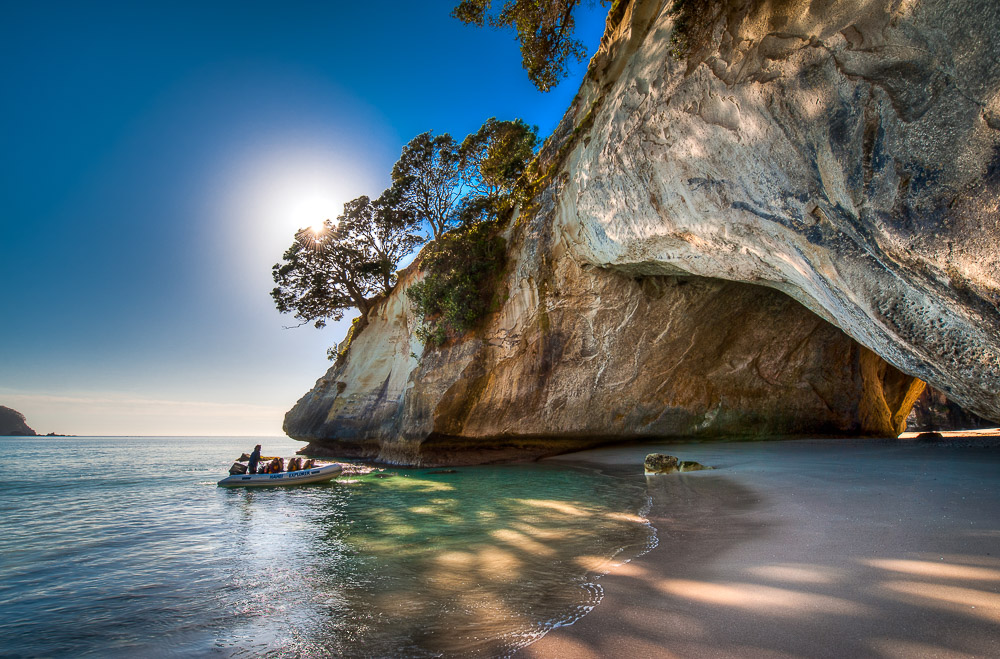 When to visit Cathedral Cove

Cathedral Cove can be visited any time of the year. Visitors are at their peak during the kiwi summer holidays (December, January). February and March are still popular months. During these times it’s best to visit early in the morning or late afternoon, early evening for a more secluded experience. Remember there are also many other stunning beaches in The Coromandel.

From May 'til October is the best time to visit if you’re looking to capture a postcard picture. You will need to walk early to the Cove for sunrise shots and you'll get a good look at the galactic core in those clear night skies.