Home ⁄ In Service To Nature - Doug Johansen aka Kiwi Dundee

In Service To Nature

Doug Johansen has always possessed a spirit of adventure and reckons he always will. Growing up in Paeroa, playing in the mine shafts of Karangahake Gorge as a child, he developed a deep and abiding love for the mountains, rainforests and old goldmines in The Coromandel. As a teenager, several people significantly influenced his knowledge of nature, including the artist Rei Hamon, who worked for Doug’s father at the time. Doug’s great grandfather was a gold miner and Doug had a close relationship with his grandmother, who would share her memories of Puketui Valley and the local area with him.

Doug did a lot of hunting as a youngster, becoming ever more familiar with the tangled web of forest and hills surrounding him. “As I got older I started to realise it wasn’t the hunting I loved so much as getting out there in the nature,” says Doug.

In the 1970’s he spent two years clearing the Hihi track, high in the Coromandel Ranges. He began searching for the Patton Stream Dam (the most complete Kauri Dam in New Zealand) after discovering indicators it was ‘in there somewhere’.  “I really started scratching round and came across it,” Doug recalls.

The re-discovery was announced in The New Zealand Herald with photographs that sparked nationwide attention. “The Forestry were quite excited I found this thing and so were the people of New Zealand.”

The Hihi track reopened in 1975 and Doug started taking groups up to see the dam, charging one dollar a day. So began what has become a lifelong journey in service of nature. Doug is recognised as the pioneer of nature tourism in New Zealand, guiding people through hidden valleys and forests they may never have seen or cared about otherwise. He has been an Honorary Wildlife Ranger and Forest Park Ranger for over two decades.

Also in 1975, Doug happened to see a raging hillside fire while driving over the Kopu-Hikuai road to work one day. It was a forestry burn off. It ignited a flame of fury within him.  “I’d been looking at those mountains since I was a child,” he explains. “I stood on the side of the road and said to myself; I’m not going to let this happen any more on The Coromandel.”

Doug went straight to the press and the fight began against the Government to stop all felling of native forests in The Coromandel. He traveled the country doing TV and talk shows about conserving the forest. It was a relentless three year fight, but in 1978 they stopped all the felling. “It felt great,” said Doug.

In 1976 Doug found four rare Kokako birds in the forest. “The minute I heard the calls I knew it had to be Kokako - even though I’d never heard them before in my life.”

It made headlines in the papers and people had another compelling reason to take a guided adventure into the Coromandel forest. In 1978 Doug made yet another discovery: two of the largest Kauri trees in New Zealand, amidst the harsh rocks and dense thickets of Motutapere. He also contributed his extensive knowledge of the area by serving on the Coromandel State Forest Park Management Committee and as Chairman on the region’s New Zealand Historic Places Trust and the Royal Forest and Bird Protection Society.

Doug speaks with specificity about the forest and all that lies within it, about the flora and fauna, the area’s history and its future. The vivid natural world is as omnipresent to Doug as the people around him, which is saying a lot. He is as much a people person as an eco-warrior. 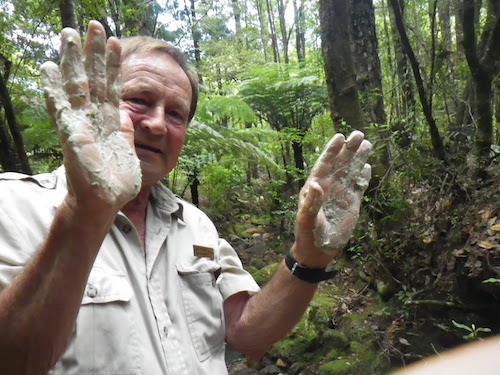 There’s not a month goes by that Doug doesn’t come across people in gas stations and restaurants who tell him they’ve never forgotten the trip they took with him into the forest many years ago. “I have a lot of fun with people,” he grins. “I play a lot of tricks.”

Today, Kiwi Dundee Adventures is internationally recognised as one of New Zealand’s top guiding companies. A clever decision to patent the moniker Kiwi Dundee (bestowed upon him in a newspaper competition in 1988) helped capture the imaginations of tourists from all over the world. But the success of Kiwi Dundee Adventures is largely owing to Doug and his partner Jan Poole’s efforts, their personalities and knowledge, sheer commitment and decades of hard work. Doug and Jan attended TRENZ for many years (New Zealand's biggest annual business-to-business travel and trade event), and traveled internationally to tell people about New Zealand, as well as guiding people on tours. In 1990 Doug was recognised with a Queen’s Service Award for services to nature and tourism. In 1992 he won the inaugural New Zealand Eco-Tourism Award, awarded by Tourism New Zealand, Air New Zealand and The Royal Forest and Bird Society. 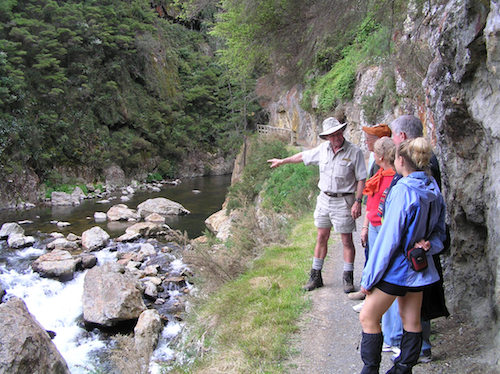 ‘Kiwi Dundee’ has been featured in countless international media: the New York Times, Educated Traveler, the Toronto Star, Men’s Journal, the Spokesman-Review. He has also starred in television programmes such as Discovery and Totally Wild Australia. In Washington, Doug met John Fahey, President of National Geographic at the time, who invited Kiwi Dundee Adventures to guide a National Geographic group on a 20 day tour of New Zealand. In one year alone, Doug and Jan realised they’d hosted 79 famils (familiarisation tours) for the New Zealand Tourism Board, all serving to spread the country’s reputation as a tourist destination.

Their tours offer so much more than a walk through the forest. They open people’s hearts and minds, inspiring a deeper connection with nature. Kiwi Dundee Adventures invites people to confront their collective human responsibility to preserve nature, wherever they may live. Doug shares a story about two Americans who purchased 700 acres of redwood forest for preservation because ‘Kiwi’ woke them up to the beauty of their own country.

“Nature needs help all over the world. It’s doomed if we don’t,” he remarks.

Doug and Jan host multi-day companion tours all over New Zealand, but The Coromandel is where it all began and remains forever close to their hearts.

“We always include The Coromandel in our trips,” says Doug. “When I first started, the tour companies didn’t want to go to The Coromandel - ‘you’ll never do any good’ they said.”  They’ve since brought millions of dollars to The Coromandel and thousands of people, though they stay away from the busy spots unless customers request them. Doug and Jan’s tours offer alternatives to the tourist track, including unknown little bays and even their own private property. Not only do they welcome private tour guests, but also school groups, garden clubs and friends and families. Doug and Jan have planted 10,000 native trees on their property, regenerating the land and creating a haven for many different species of native birds. With little grandchildren adding a lively new element to Doug and Jan’s lives these days, tree huts and treasure hunts in the forest are a regular fixture too. Doug and Jan believe their home is a place to share. 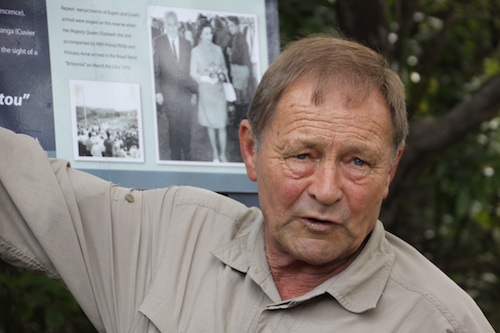 Doug didn’t imagine the extent of his contribution to conservation and tourism, or the influence he would have on so many people. He says his biggest contribution remains the fight to save the forest. His many achievements reflect that commitment to conserving the forest and honour his lifelong love of the mountains. From locating Kauri dams, to identifying native birds, to guiding thousands of people on tours, it has all taken place within the forest.

Doug Johansen was acknowledged this year with the Industry Showcase Special Award at the 2017 Coromandel Annual Tourism Awards. The supreme award is given to an individual who has shown outstanding commitment, passion and leadership to the tourism industry in The Coromandel. Doug was visibly moved to receive the award. For ‘Kiwi Dundee’ - the eco-pioneer known all over the world - it meant a lot to be acknowledged locally.

Doug has dedicated his life to conservation, education and sharing the natural beauty of The Coromandel. He offers this advice for anyone considering a similar path.  “You’ve got to have a passion for nature, be a real people person and have a bloody good knowledge of what’s going on in this country. Too many buy a wagon and think people are just going to come - they don’t. It’s not an easy job but it’s a job I love. It just flows off my back these days.”